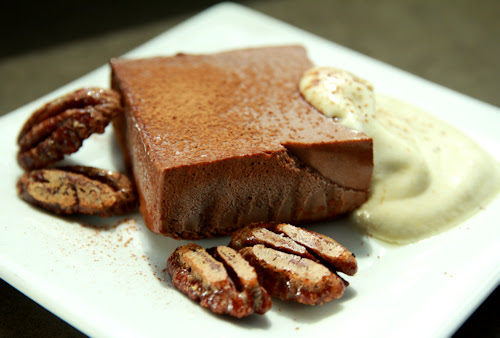 The May 2011 Daring Bakers’ challenge was hosted by Emma of CookCraftGrow and Jenny of Purple House Dirt. They chose to challenge everyone to make a Chocolate Marquise. The inspiration for this recipe comes from a dessert they prepared at a restaurant in Seattle.
This month I've been far too busy to do much blogging.  There has been gardening, Alex's school, houseguests and trips downstate, 15 new birds (9 new ducks and 6 chickens), lots of poking around outside looking for morels-- plus I seem to be terribly accident prone this month.  I usually rack up a number of burns, cuts and bruises but this month I've added a smashed shower door, a sunburn and a punctured foot to my list.   Let's hope I piled all of this into May and will have a pleasently uneventful, productive and relaxing summer.

Somehow I did manage to whip up this month's Daring Baker challenge.  Looking at the recipe I initally was annoyed and frustrated.  Recipes for mousse are so tough to do dairy-free, especially if you are also mostly soy-free as well like us and don't have the option of using silken tofu.  Then I went through a pouty phase where I complained in my head that the hosts chose a recipe that didn't even have a mandatory baked item.  It's supposed to be Daring *Bakers* not Daring Desserts!  But eventually I came up with a game plan and forged ahead.  I've been eating almost no refined sugar since the beginning of the year so the first change I made was to use honey to sweeten all the components.  I also substituted unsweetened baking chocolate for the bittersweet and swapped carob powder for the cocoa.  For that tricky heavy cream I gave extra chilled coconut cream a try and I spiced my mousse and nuts with ginger and black pepper.

The changes ended up being fairly simple and the result was pretty decent.   The ginger and pepper went well with the honey flavor and yet dark chocolate was still the star.  The mousse texture was a little grainy when still hard but smoothed nicely when I let the squares warm up a little more.  With all the egg and yolks they still were light and creamy.  But the best part was the nuts--they are fantastic!!  I'll be making batches (and batches and batches) of them again.  So thanks for the challenge Emma and Jenny, as always I'm happy to be a Daring Baker and give something I would never try to make a chance.

Here are my altered ingredient lists. All of these are scaled to make 1/4 of the original recipes or 6 servings each with 1 (2"x2") cube of marquise.  Instructions and original ingredient lists found here on the Daring Kitchen.
Chocolate Marquise
3 large egg yolks at room temperature
1 large egg
3 tablespoons honey
Chocolate Base, barely warm (ingredients follow)
½ cup coconut cream*
½ cup carob powder (for rolling or dusting)
*By coconut cream I mean I took can of coconut milk and placed it in the fridge unopened overnight. I then scooped out only the thick cream and left the watery liquid to be used in another application. I chilled the measured amount of cream in the fridge and whipped it like heavy cream using chilled beaters and a chilled bowl. It doesn't get the volume of heavy cream but does get fluffier. I then combined the whipped coconut cream with the chocolate base before folding it into the egg/yolk mixture.  This is the opposite of the instructions which have you mix the base with teh yolk mix first.  This way the egg mixture is able to transfer as much volume and air as possible to the finished dish.

Links:
-For the instructions to go with my ingredient lists, or the original recipes, visit our hosts Emma of CookCraftGrow and Jenny of Purple House Dirt.  Or see the complete recipe here on the Daring Kitchen site.
-Emma and Jenny learned how to make this marquise dessert when they worked together at a Seattle restaurant. The recipe is adapted from one developed by Bennie Sata, a Seattle-area pastry chef who introduced the city to one of its iconic chocolate desserts. They also included vegan recipes which were created by Ashlae of Ladycakes.
-Visit the Daring Kitchen to see the baker blogroll and other treats made this month. 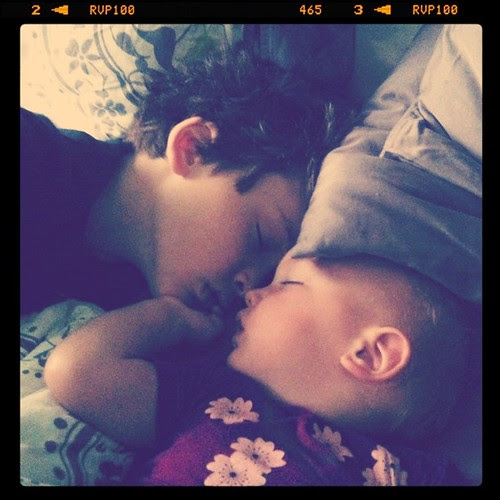 Alex and Penny drawing together 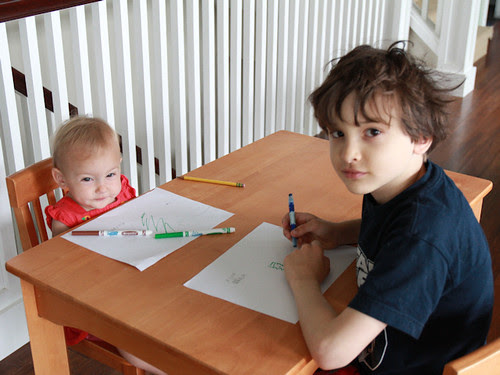 Penny sitting in a patch of ramps.  She was stealing cooked ramp greens from my plate just yesterday. 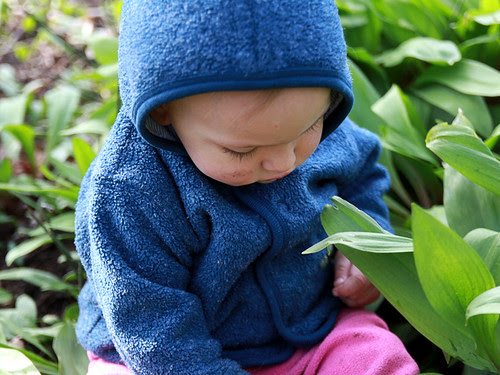