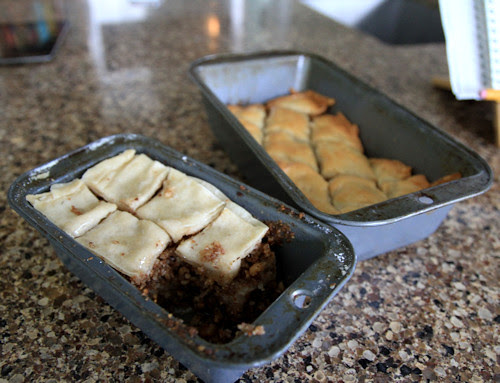 Erica of Erica’s Edibles was our host for the Daring Baker’s June  challenge.  Erica challenged us to be truly DARING by making homemade  phyllo dough and then to use that homemade dough to make Baklava.
It was just my luck that I'd still be avoiding wheat when the Daring Bakers decided to make homemade phyllo.  It's been on my To Try list for a long time and so I couldn't resist making both a wheat flour and a gluten-free version of this dessert.  The wheat phyllo wasn't as hard as I thought it would be though I think I made it a lot less challenging by baking a small batch, small sheets are much easier to roll out.  The gluten-free recipe we were offered required a specific brand of flour mix and so I just chose to make a mini batch and wing it.  I used a combination of tapioca flour, sorghum flour and cornstarch but it really wasn't much of a success. It couldn't be rolled thin enough, was too tough in the finished product and didn't brown properly.  Apologies for the top picture, I just never got around to getting a shot of the cut slices.  But you can see the gluten-free phyllo is in the smaller pan and clearly not the golden brown I intended.  It was still edible and the honeyed nut filling was delicious.  For both of my baklava, I left out the sugar in the nuts and used a combination of almonds and walnuts.  I spiced them with cinnamon and cardamom and made the syrup with honey, lemon juice and a splash of orange flower water.  My wheat baklava went to friends we had over for dinner and for my first try at homemade phyllo I thought it was alright.  I did notice that it needed more syrup because it wasn't as sticky as I would have liked.  But there is always room for improvement and now I can check off an attempt at homemade phyllo, what next?

Lately we're busy trying to make the most of the sunny days we get.  My vegetable garden is coming along nicely and our new ducks and chickens are getting all grown up.  Alex had a fun birthday and loves being free from school.  Penny is growing like a weed and learning to climb up on everything-- couches, beds, chairs, tables!!  I try to give her lots of time outside so we can avoid that.  She and Alex are kept busy picking strawberries, fighting over the hose and hunting for frogs around our pond.  Right now we have over a dozen green frogs, 5 or 6 painted turtles and several generations of tadpoles in the pond John had dug last fall.  What Alex really wants to find is a salamander so we've been poking under all the rotting logs in our woods.  Summer is grand!  I hope yours is going as well as ours.

Links:
-For the full recipe visit our host Erica at her site,Erica’s Edibles.   Or view the recipes HERE in a PDF version.
-Erica based her recipe on those found in the book Kaffeehaus: Exquisite Desserts from the Classic Cafés of Vienna, Budapest, and Prague

and the Baklava recipe from Alton Brown.
-I think if I'm ever eating gluten-free and crave baklava these Baked Apples "Baklava" would be a better choice than trying gf phyllo.
-Other participants for this challenge are listed in the Daring Baker Blogroll.


The wheat phyllo, see how you can read the paper through it. 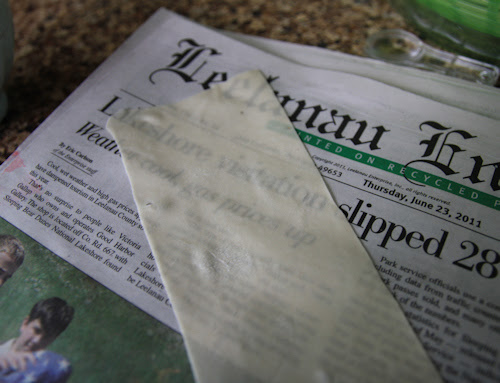 My attempt at gluten-free phyllo, thin but I couldn't get it transparent. 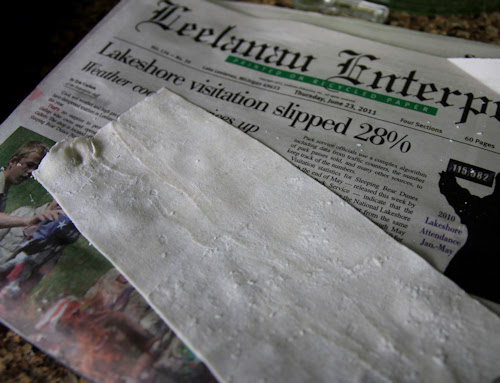 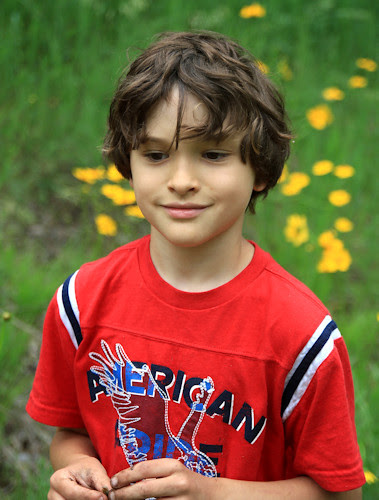 Penny on a salamander hunt 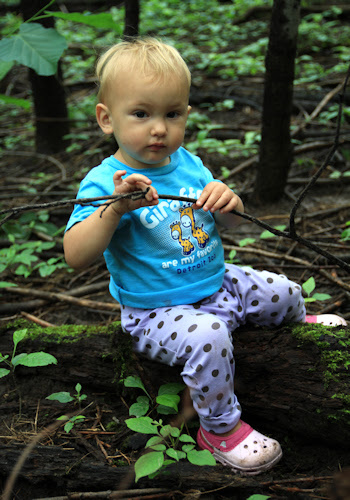 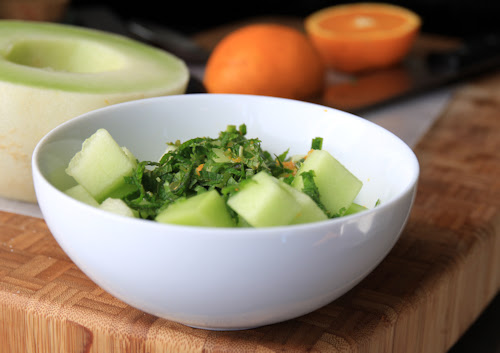 This month's Spice Rack Challenge is mint.  I have my vegetable garden planted and school done for the summer so I should be able to find a few moments to blog here and there.  I have my two favorite mint combinations blogged already, mint/chocolate and mint/lamb so I had to think of what else I like to do with mint.   I think mint is wonderful in any fruit salad and mint and melon are especially good together. Here is my non-recipe for fruit and mint, of course it's simple but I need a baby step right now.