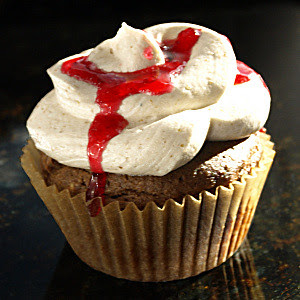 Coincidentally, contemplating cranberry cupcakes can create a clever combination with chestnut and chocolate.

This month's Iron Cupcake Earth ingredient cranberry sent my mind spinning with ideas. Cranberries are in season and it's easy to find Michigan-grown berries. I'm always happiest playing with local and seasonal ingredients. The question was what to pair the cranberries with that would be appealing and unique. Someone beat me to the excellent cosmo-inspired pairing of cranberry and orange (boozed up of course, yum!) I went through and considered the entire Ocean-spray line (Cran-raspberry, Cran-apple, Cran-grape...) but that didn't peak my interest either. Then I came across some Michigan chestnuts. The combination of cranberries and chestnuts seemed fitting in a traditional holiday way. I began looking for chestnut cake and cupcake recipes. Nothing seemed perfect. Then I switched my search to include cakes with chestnuts and chocolate. Sweets aways disappear faster when there is chocolate involved. This brought up a lot more recipes to tweak but nothing specifically dairy-free or vegan (even though I cook with eggs, I have a vegan cupcake fetish.) So I made the decision to replace the pumpkin in a vegan brownie recipe with roasted chestnut puree. I filled my cupcakes with homemade Michigan cranberry preserves and made a frosting that included chestnut puree.

The cake is mildly sweet and not overpoweringly chocolaty. You can taste the natural sweetness of the chestnuts and smell their aroma. The sweet/tart preserves inside bring the cake up to the right amount of sweetness. I chose not to spice the cranberry preserves but would probably do so in the future. My favorite part was the chestnut frosting. I fight with using tub Earth Balance margarine for frostings because it is just slightly too wet. To get a stable frosting you have to

over sweeten with powdered sugar. You can solve this by replacing some of the margarine with shortening or by using the Earth Balance sticks but both suffer from a waxy mouthfeel. The chestnut puree solved this and added a nuttiness and nutritional boost (ok ignore that last one it's a cupcake, who cares?) I've never worked with canned chestnuts but I'm thinking about making a big batch of puree and freezing it for future frosting. I bet it would be excellent in a chocolate frosting as well. Here's what I did: 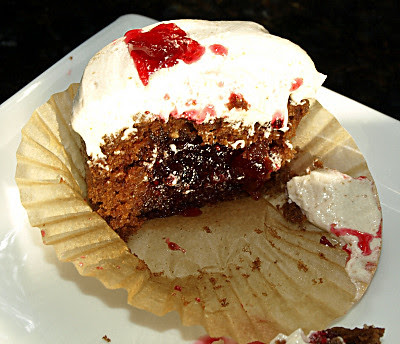 Chocolate Chestnut Cake
Special thanks to have cake, will travel for the recipe Pumpkin Chocolate Brownies I used as a starting point.
Makes 12 cupcakes

-Preheat your oven to 350 degrees F and line a cupcake/muffin pan with papers.
-Mix together the soy milk and vinegar and set aside for a few minutes.
-Stir/whisk together the two flours, baking powder, baking soda, cocoa powder and salt and set aside.
-Place the two sugars and the chestnut puree into the bowl of a stand mixer fitted with a paddle attachment. Beat until combined. Scrap the bowl down and add the soured soy milk, oil and vanilla. Beat together until smooth, additional scraping may be needed.
-Add the dry ingredients in three stages beating until almost (but not completely) incorporated after each addition. Scrape down after the last of the flour mixture has been added and fold a few times to ensure that all the ingredients are blended evenly.
-Spoon into the lined cupcake pan, filling each cup two thirds of the way full.
-Bake for 20-25 minutes, until a toothpick inserted in the center comes out clean.
-Cool for 5 minutes in the pan and then transfer and cool completely on a wire rack before filling.

-Add the ingredients to a saucepan and cook down until thickened, stirring occasionally, approximately 20-30 minutes.
-Cool and store covered in the refrigerator.

-Beat the margarine and chestnut puree together until smooth and combined.
-Sift in the powdered sugar and beat together. Add powdered sugar until a pipeable consistency is achieved.

Cupcake Assembly
1. With a 3/4" to 1" round cutter remove a plug from the top of the cupcake. Trim off extra cake from the plug and gently scoop out enough cake from inside the cupcake to create a reservoir.
2. Fill with cranberry preserves (~1 teaspoon) and cover with the top of the trimmed cake plug.
3. Pipe on the chestnut frosting and drizzle over some of the thickened liquid from the preserves.
4. Chill and store in the refrigerator. Allow to warm to close to room temperature before eating.

Some links:
-The Cosmo-inspired vegan cupcake that makes me jealous
-Michigan-based Chestnut Growers, Inc (With a schedule of events in Michigan where they will be selling their chestnuts.)
-Cranberry growing in Michigan
-Which type of chestnut tree should I grow on my new land? Oikos Tree Crops has 12 varieties of chestnut trees for sale.

Visit No one puts cupcake in a corner to vote for the best cranberry cupcake.
Voting begins on Nov. 30 by 8pm and ends on December 5th at noon.
The November Etsy Prize Pack includes prizes from:
Lollipop Workshop, Cookie Sunshine, Lots of Sprinkles, Cakespy and Sweet Cuppin Cakes Bakery and Cupcakery Supply
Prizes also come from these corporate providers:
Head Chefs by Fiesta Products, Hello Cupcake by Karen Tack and Alan Richardson, Jessie Steele Aprons, The Cupcake Courier, and Taste of Home Books
Iron Cupcake:Earth is sponsored in part by 1-800-Flowers
Posted by Maggie