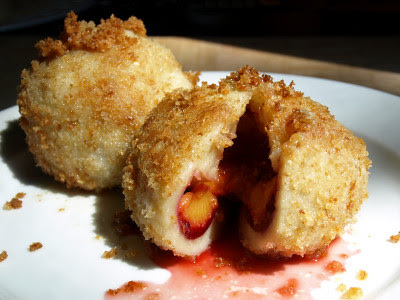 I adore Italian prune plums and have been waiting impatiently for local ones to arrive at the farm stands. Last year I must have eaten a third of my body weight in plums. I micro-stewed them and topped them with a little brown sugar and sour cream and ate them straight up but I neglected to make plum dumplings. This is a favorite family dish that came from my great-grandmother Mary Westermeyer, who is my father's maternal grandmother.

Mary came over from Hungary in April 22nd 1914 when she was 17 years old passing through Ellis Island. There her surname changed from Schorsch to Scharsch. She settled in Cincinnati and a year later married her first husband, Joseph Hoffman. He shortly passed away in the Spanish flu pandemic. In 1921, she married my great-grandfather Anthony Westermeyer. She gave birth to a gaggle of kids, 10 surviving to adulthood. My grandmother Margaret was one of their middle children. They lived in Cincinnati then moved just over the border into Kentucky. My father remembers his parents making these together and I remember him making them with my mother helping. Alex noticed me making these and wanted to help. He cut out the plum pits and took dough and made several dumplings by himself. He also ate quite a few sugar cubes straight up! And the family tradition goes on... 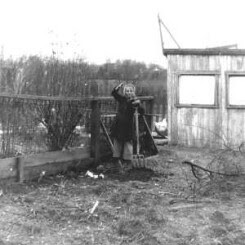 My grandmother Margaret, with a dog on a hill! 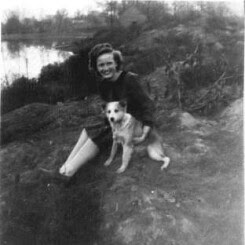 The dumpling dough is reminiscent of soft gnocchi dough. The bread crumbs and pan frying give a crispy contrast. Inside the tart plum's juices meld with the cube of sugar to create a delightful sauce that tempers the plum. I prefer to leave taste of the plums alone but try adding spices or liquors to see what suits your taste. I do recommend getting the sugar cubes. It's going to make your life easier since granulated sugar will try and fall out of the plum while you are covering it in dough. Additionally, I think there is some magic in how the cubed sugar dissolves that makes it better. You can use the rest of the sugar cubes to impress your friends when they come over and have a cuppa. Who gets to say these days, "Would you like one lump or two?" I found unrefined sugar cubes that added a molasses flavor that I loved. The recipe has several stages but all the steps are easy. The dough is forgiving and even the few that leak a little when you boil or fry them somehow survive and are still great. The hardest part is waiting for them to cool after you fry them. The hot, syrupy juices inside are like napalm, so watch out!

Note: I'm hoping to give these a try in a smaller batch with a substitute for the egg so that I can make them more often and have a vegan version of the recipe. I'll update the post after I try it.

1 1/2 - 2 dozen Italian prune plums (this will vary with the size of the plums)
4 or 5 medium sized potatoes, peeled and quartered
1 egg, beaten
4 cups of flour, sifted
1 teaspoon salt
bread crumbs
butter (I use Earth Balance)
sugar cubes or 1/2 tsp. granulated sugar for each plum
cinnamon, or rum or orange liquor (optional)

-Cook the potatoes in salted water until soft. Drain them well and allow them to give off a lot of steam. Mash potatoes while they are still warm and add the flour and salt. Make a well and add the egg. Mix or knead the dough gently until everything is blended.
-Wash the plums and pit them, cutting on only one side to the pit so that they create something like an open clamshell. Form a circle of dough about 4 inches in diameter, or enough to cover your size of plum. Place a sugar cube (or the spoon of sugar and some cinnamon or liquor, if desired) into the center of a plum and fold the dough around the plum to form dumpling. Make sure to pinch the edges tight to seal. You may think that the dough is sticky enough that it doesn't need to be pinched but those will be the leaky ones. Roll the sealed ball gently in your palms to form a nice sphere.
-Bring a large pot of water to a boil. Salt the water and cook a few dumplings at a time for about 10 minutes. Remove the dumplings with a slotted spoon and drain well but before the surface of the dumplings dries off roll them in breadcrumbs.
-Melt some butter (more is better) in a large skillet over medium heat. Place the dumplings in the skillet and turn them carefully until bread crumbs are brown all over.
-Serve warm, sprinkled with leftover crumbs from skillet.


Cut the plums on only one side so that they create something like an open clamshell. 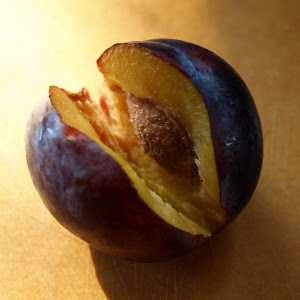 Place the sugar filled plum on a 4 inch disk of dough. 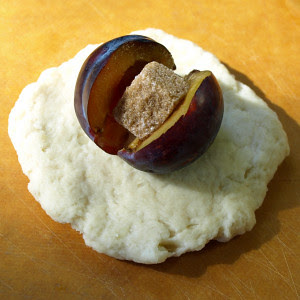 Cup the dough around the plum and pinch the seam well. 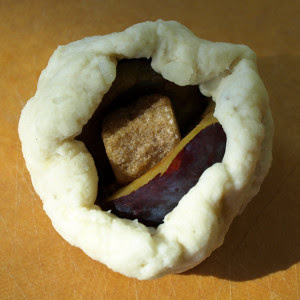 Dumplings ready to be boiled 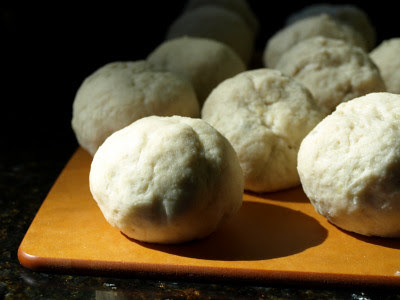 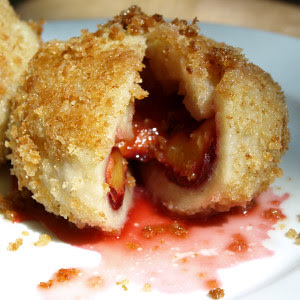 The Cincinnati Chili cupcakes I made for my dad
Photos of Alex making dumplings
More photos of Mary and my grandma Margaret
Mary's Ellis Island Passenger Records
The Kaiser Wilhelm der Grosse, the boat Mary came to America on
Posted by Maggie