Soft Pretzels (with a touch of whole wheat flour) 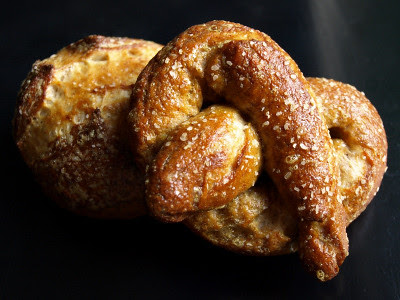 Update: Jennie from A Vegan & a Dog Named Keiko made these and used soymilk in place of the egg yolk and they worked for her. Now we have a vegan version of the recipe, thanks Jennie!

Today in an effort to give the neighbor kids and Alex something new to do I made some pretzel dough. The little girl from next door and Alex like to play with clay together and Alex loves to do anything in the kitchen. This turned out to be a good idea but I managed to make a couple of mistakes. The first was to tell the girl from next door that we were going to make pretzels a good 30 minutes before the dough was done rising. "Alex's mom, is it pretzel time yet?" became her mantra, repeated through the screen door at least every minute. Mistake number two, I gave them sidewalk chalk to keep the nagging down. They were already wet from the sprinklers and wet + chalk = indelible chalk paste. I had to hose and scrub them down when the dough was finally ready and one pretzel still had a tinge of blue before it was boiled. They had a good time and I was feeling pretty proud of myself when my husband John walks in and sees the pretzels. This was my final mistake, halving the recipe. After some puppy dog eyes and blatant flattery about how good they were, I made a second batch so John could have some. 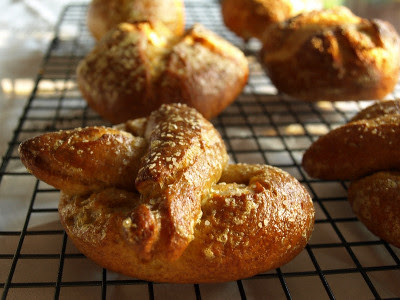 This was an adaptation of Alton Brown's Good Eats Soft Pretzel recipe. I wanted to add some whole wheat flour and then discovered I was all out of all-purpose so I made up the rest with bread flour. They were chewy with a authentic pretzel taste and the dough was easy to work with. I think the bread flour is unnecessary but I loved the touch of whole wheat. I'd like to try the same dough with cinnamon sugar instead of salt and honey instead of sugar. I'm not sure if I'd boil those or not? Alex loves cinnamon and I think a slight honey flavor would go well with the whole wheat flour. The kids gobbled these up and Abbie even had to check them out (see her in the last shot). 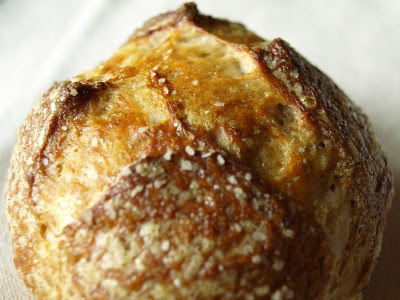 -Proof the yeast with the water and sugar for five minutes (or skip it, I rarely proof yeast)
-Add the flour, salt and margarine to the yeast, water and sugar. Mix in a stand mixer with a dough hook until the dough is smooth and elastic.
-Place the dough in an oiled bowl and cover with a damp towel or plastic wrap. Allow to rise until doubled 50-55 minutes.
-Preheat your oven to 450 degrees F. Bring the 10 cups of water and baking soda to a boil in a large pot. Line a baking sheet with parchment paper.
-Punch down the dough divide into six equal pieces. Oil your hands and a clean surface and roll the dough out into a rope ~16 inches long. Make a U with the rope and then cross the two ends over each other. Or make any shape. We made circles and small rolls and little baguettes and they all were good.
-One at a time gently place the pretzels in the boiling baking soda water for 30 seconds. Remove and place on the lined baking sheet.
-Add a teaspoon of water to the egg yolk and beat it to incorporate the water. Brush the yolk onto the pretzels and sprinkle on a little kosher or pretzel salt.
-Bake in the oven for 12-14 minutes. Cool on a wire rack.

Abbie the kitten gets her feet in the shot. Then she checks to see if it's edible.

Other pretzel stuff:
I didn't see this recipe until after I made my second batch!! Next time I really want to try the awesomely named Hell Boy Pretzels!

I added this to Yeastspotting. I get Susan's Wild Yeast email feed and I love the end of the week roundup with a ton of new bread ideas.