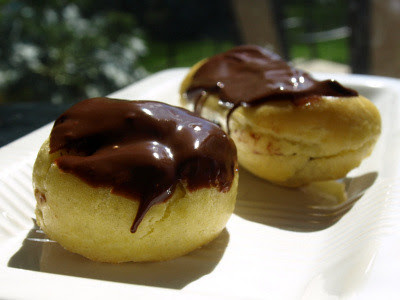 Back in March, I came across a paté choux (cream puff dough) recipe with half whole wheat flour and made lemon-raspberry cream puffs. They were a huge hit with me and Alex. I really loved the nutty taste of the puffs and Alex loved the raspberry glaze made with frozen raspberries. Unfortunately, they spoiled me terribly.

When it came time to make the Daring Baker eclairs, I decided to stick to the original double chocolate recipe and only do my standard dairy-free substitutions. This meant soy milk for the cow's milk and Earth Balance for the butter. But after baking most of my eclairs deflated and almost all of the eclairs and puffs were a little soggy in the center. Maybe this was the soy milk or maybe it was my technique, I'm not sure. The chocolate pastry cream came next and it was very chocolaty but I could tell it wouldn't be sweet enough for Alex's tastes. It made a lot extra as well. The assigned chocolate glaze recipe called for heavy cream so I found an easy chocolate glaze recipe on All Recipes. Again, it was really chocolaty due to the Scharfen Berger 70% semi-sweet chocolate I used but not sweet enough to appeal to Alex.
Mostly, I just couldn't stop comparing these cream puffs to the raspberry ones. Darn it, I was craving nutty puffs and raspberry glaze! I passed along half to my in laws and the other half to my parents. Everyone seemed to like them, except me and Alex. Despite my husband's convictions, sometimes chocolate isn't the answer for the perfect dessert. I probably just need to wait and try these again when I'm craving dark chocolate. Or maybe it's time for another batch of the whole wheat ones?

To read other post from people who surely enjoyed their puffs more than I did visit the Daring Bakers Blogroll. Don't forget to scroll down to the bottom for the other alternative bakers. The inventive substitutions for wheat flour and eggs are my favorite reads.

For the full chocolate éclair recipe please go to either Tony Tahhan and What's for Lunch Honey. 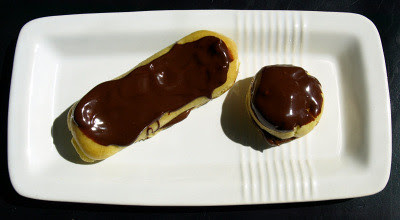