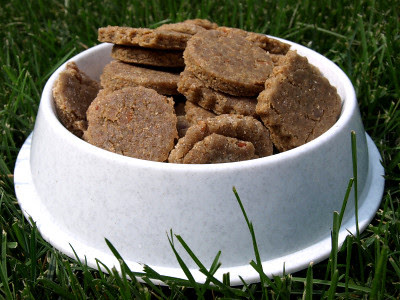 After Abbie's appearance yesterday my husband complained that our dogs Karmal and Roxy are not getting any face time on the blog. Ok, I named it Dog Hill Kitchen but I'm really a cat person. The dogs are my husband's true loves. John whined enough so I figured I'd post a picture of our two dogs to get him off my back. Then I remembered Peanut Butter Boy's dog treat recipe I had seen just days ago. The poo shaped treats which he himself ate (!) cracked me up. We don't eat peanut butter, but I had a fresh jar of Sunbutter for a substitute. It was their new organic unsweetened kind and I wasn't liking it. I love the regular creamy and crunchy Sunbutter but I needed a way to use the unsweetened up.

There was a problem though. Our dogs are spoiled rotten and Roxy in particular is very picky. I cook for them fairly regularly and I've even taken to alternating their meals with raw. I try and give my two kitties a couple of raw meals a week too. I decided to enhance the recipe with a touch of bacon. I also had some soy flour not being used so I swapped that in too. I figured it would add more protein to the recipe.

Just as the oven finished preheating and everything measured out who should arrive but Alex's friends from next door. "Whatca making?" was the first thing out of the little girl from next door's mouth. She and Alex had fun making the soft pretzels last week so I invited them to help. The older boy couldn't be lured away from our Wii but the younger two were all for it. It was a great project for the kids. They took turns adding the premeasured ingredients and mixing each in. Then we all rolled out a piece of dough and cut out shapes. We sent her home with a bag for their dog.

Roxy was suspicious when I offered her a treat but after seeing Karmal gobble her's up she went ahead and ate it. Then they both were clamoring for more. I tasted one and these are most deinitely not for humans. Here's the recipe and pictures of the dogs enjoying their treats. 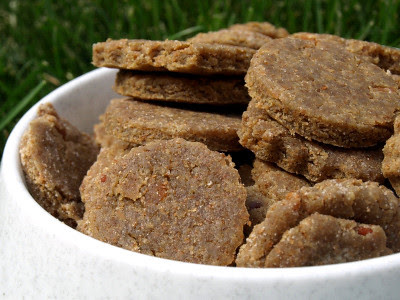 -Preheat oven to 300 degrees and line two baking sheets with parchment paper.
-Fry the diced bacon until crispy. With a slotted spoon, remove the crispy bacon but save the fat. Allow the fat to cool slightly (2-5 minutes)
-Add the egg, peanut butter, maple syrup and water to the bacon fat and mix thoroughly.
-Add in the flours and wheat germ and mix until combined. Stir in the crispy bacon pieces.
-Roll out the dough on a lightly floured surface to about 1/4" thick. Cut into desired shapes. I used three different 1" cookie cutters.
-Bake in the oven for 12-15 minutes (for 1" diameter shapes) until lightly browned.
-Cool and make them beg for it. 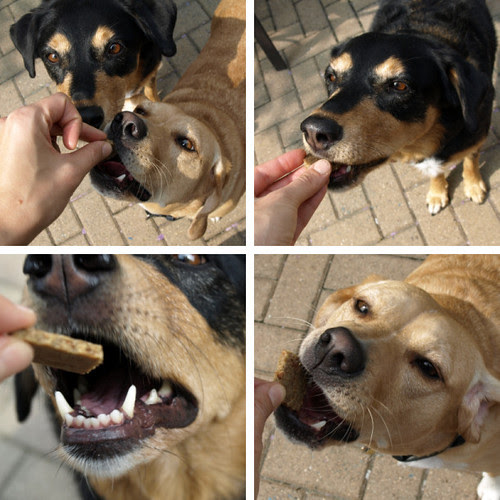 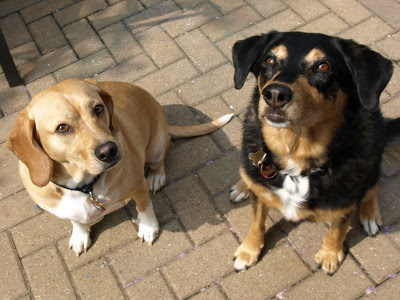 They're cute all right but the one on the left, I've caught her eating poo, more than once.
Cats are SO much better.
Posted by Maggie