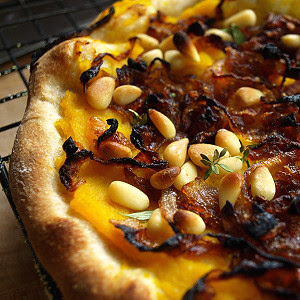 I've made quite a lot of homemade pizza. Originally I started doing it because it's fun and then it became a necessity with Alex's dairy allergy. With all our homemade pizza we've had a chance to try a few dairy-free cheeses over the years. There are winners like Chreese and losers like Tofutti slices (which are even more disgusting than the dairy version of plastic cheese.) We've settled on Follow Your Heart Vegan Gourmet Mozzarella as our favorite pizza "cheese". The taste is mild and it melts nicely. But I also discovered that for me cheese can be completely replaced with caramelized onions. When I found out that October's Daring Baker challenge was pizza I knew I had to have both a fake cheese and a caramelized onion version of dairy-free pizza.

As things went, I ended up waiting til the last minute to do the challenge. I added a little whole wheat flour to the dough (1/3 of the flour by weight) but otherwise followed the recipe exactly. My procrastination forced me to raid the fridge for pizza toppings. I made Alex a simple tomato sauce and fake mozzarella pizza. For my pizza I decided to use up some cooked pumpkin from the fridge. I seasoned the mashed, roasted pumpkin with a little salt, olive oil and cayenne pepper. Then I used it in place of sauce with caramelized onions, toasted pine nuts and fresh thyme. The sweetness of the onions and pumpkin were wonderful together and the pine nuts gave texture and richness. 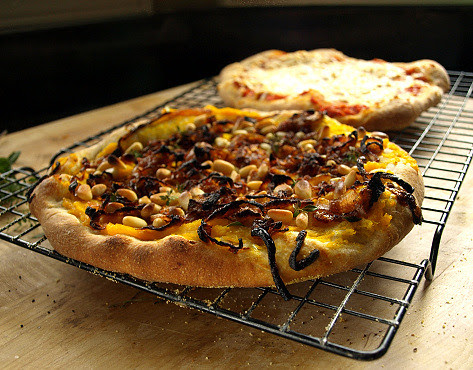 Part of this pizza challenge was attempting the tossing method. I may have given a few gentle back and forth tosses over the years but never really went all out and tried to spin it in the air. It was scary at first but I managed to not drop it. I had one or two rip a little but they patched easily and it did make the dough nice and round. Alex got to toss the last pizza and inevitably it landed on the floor. Who ever said a little cat and dog hair hurt anybody?

Tossing the dough like a pizzaiolo (sort of)
Check out the Foodbuzz apron! 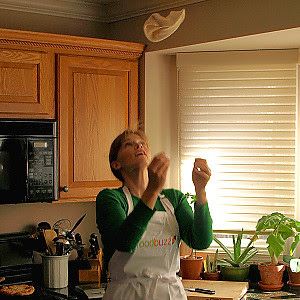 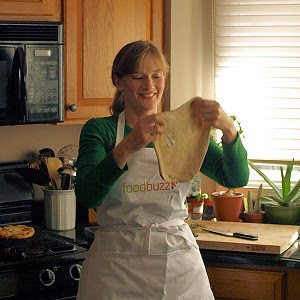 This month's challenge was originally going to be co-hosted by Sherry of What did you eat? but tragically she passed away this July. Her co-host Rosa of Rosa's Yummy Yums continued on alone and used the recipe they had talked about, Pizza Napoletana from Peter Reinhart's “The Bread Baker's Apprentice”. You can visit Rosa's site for the complete recipe as well as a gluten-free version. To see the other experiences making pizza take a look at the Daring Bakers Blogroll.
Posted by Maggie