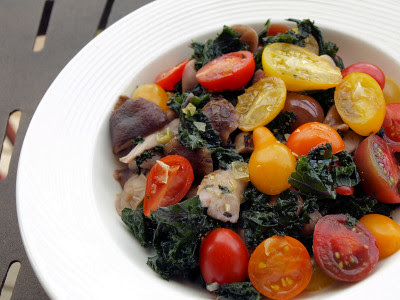 We relaxed all day today which is something we haven't done much of on our recent trips up north. I did still make John look at books of light fixtures, but he was no help. The day before I had picked up some groceries including shiitake mushrooms, red Russian kale and mixed cherry tomatoes. I picked these three items because they all looked beautiful and were grown locally but I hoped that they would work well together. Since I'm not in my own kitchen the preparation is super simple but the result was flavorful. I really loved the black cherry tomatoes. They were wonderfully sweet and balanced the kale's slight bitterness. I think I crowded my pan when cooking the shiitakes but they still gave the umami flavor I wanted. They just didn't have the texture I wanted. I'll be making this combination again and working on the technique. Here's what I did: 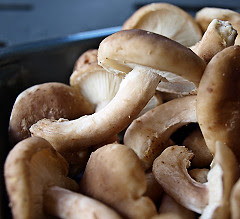 Prep:
Take 1 bunch of kale and strip the leaves from the stems. Wash the kale leaves well and chop them roughly, leave the water that clings to the leaves. Remove the stems from approximately 2 cups of shiitake mushrooms. Brush away any dirt. If the mushroom caps are large then slice them into strips or halve them. I had very small caps so I left most whole. Peel and slice 3 cloves of garlic. Wash and halve 1 pint of cherry tomatoes.

Cook:
Heat a large frying pan over medium high heat. When hot add 1 tablespoon of olive oil, coat the pan and add the mushrooms. Allow the mushrooms to cook and brown slightly. Add the garlic and kale and season with salt and pepper. Turn the heat down to medium and allow the kale to wilt just a little. Add the tomatoes and turn off the heat. Toss to distribute the tomatoes and warm them slightly. Serve with a drizzle of olive oil and a sprinkle of flaky salt. 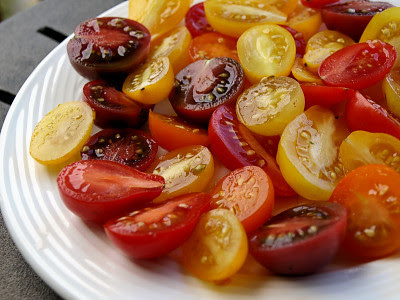 My lunchtime view of East Grand Traverse Bay
It was blustery but beautiful. 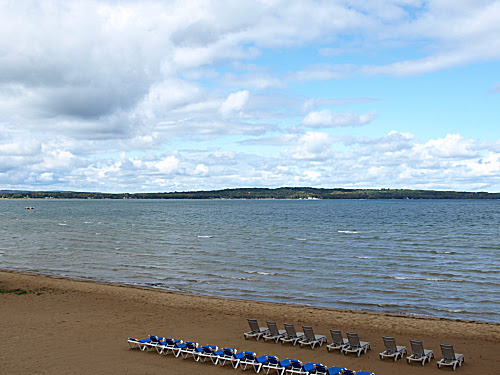